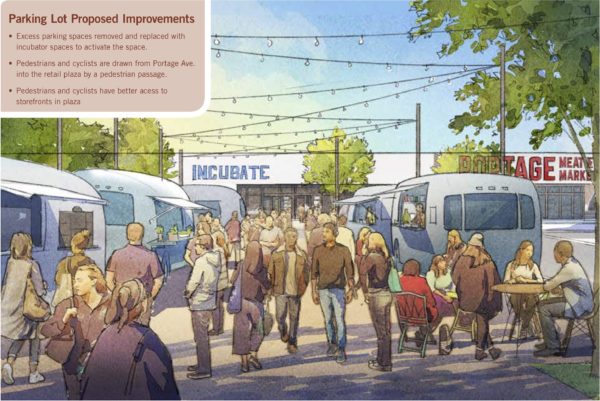 Just north of downtown, the Portage Street Market was developed in the 1960s as a neighborhood center. As development patterns and demographics shifted the center needs to reposition itself. Working with Opticos, Urban Advisors helped provide a development strategy and feasible vision for the site. The primary challenge was building a program of uses that would serve local demands and compete in the retail market place, while maintaining affordable rents. Our team provided demographic data on local market preferences and support for local retail uses. This led to the recommendation of a smaller, 12,000 square foot neighborhood grocery with ancillary hardware store. The rest of the 40,000 square foot building could be inexpensively retrofit to sub lease stalls that would form a market arcade especially for small food service providers and artists. 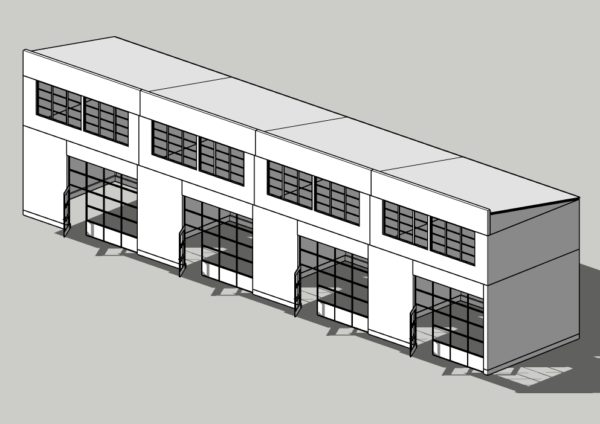 The Woonasquatucket River was once a center of economic activity and employment adjacent to downtown filled with historic mill buildings. Although many have been demolished leaving vacant sites, the district is still home to industry, fabricators and artists. Working with Principle Group, Urban Advisors helped shape a plan for the district by providing economic analysis and pro-forma analysis of development scenarios to “Maker Lofts” evaluate public costs and benefits. A primary concern of stakeholders was preserving affordable working space. One of the design and development solutions for a building typology in the neighborhood was “Maker Boxes”: inexpensive concrete sheds for artists and fabricators to incubate their businesses. The evaluation of potential catalyst sites helped shape priorities for the City and provided a framework for evaluating public investments. 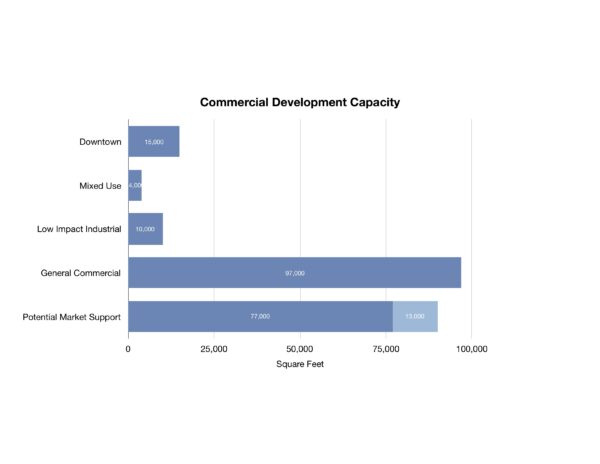 Although Avon’s population is not rapidly increasing, the Village was confronted by growth pressures as developers proposed large new projects near the historic village center. A building moratorium was called while the Village updated its comprehensive plan to make sure new development contributed to the existing character. Working with Steinmetz Planning Group, Urban Advisors provided an economic background to understand the shifting demographics and trends shaping future market demands. GIS analysis of existing land by development potential demonstrated the amount of infill development that could be accommodated under moderate design changes to the highway leading into town and within the village itself. This helped the village calibrate the land use intensity in shaping regulations. 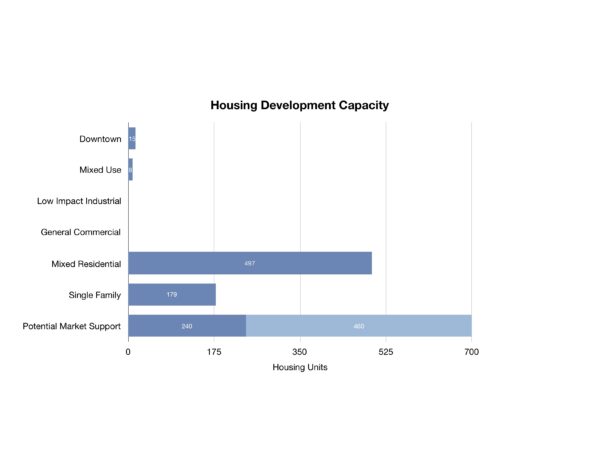 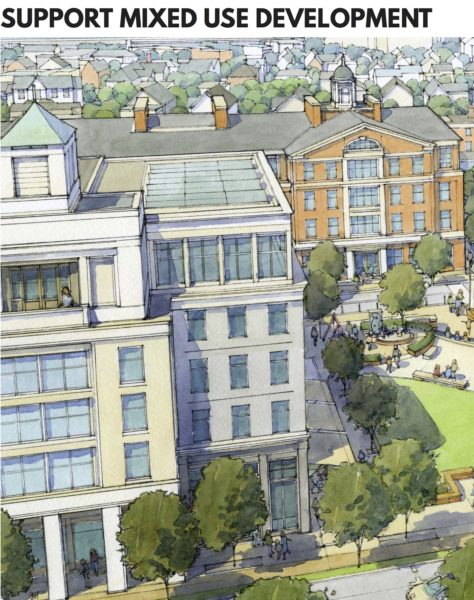 As part of the Somerville by Design neighborhood planning charrette process, Urban Advisors worked with Principle Group and City staff on a plan for the Winter Hill neighborhood. Responding to neighborhood concerns, we examined the market for grocery services explaining why a store had recently closed and identified a new location where a store would be viable. Urban Advisors provided pro-forma analysis to guide feasibility of proposed development including parking, and allotments for affordable units.  The plan included recommendations for feasible mixed use development along the neighborhood main street as well as infill development along and under an existing freeway.

Urban Advisors worked on a team with Highland Planning, Bergman Associates, and DiDonato Associates to submit a successful 2011, TIGER III grant application for infrastructure and street improvements along the existing downtown Buffalo streetcar corridor. This complete streets project will reintroduce two-way vehicle traffic to Main Street in downtown Buffalo, NY and improve existing transit stations along the Main Street and fund major streetscape improvements to revitalize and reorient economic growth downtown — part of a larger initiative to revitalize the historic downtown by improving transportation connectivity, reinvesting in streetscaping, and encouraging retail growth. Urban Advisors conducted the benefit/cost analysis, quantifying the impacts of improvements. Analysis included evaluation of land productivity based on rents and residual land value, residual value of right of way improvements, construction and long term employment, retail spending and reduction in injury. Our team carefully considered the aspects of each benefit and advanced successful arguments for the advantages of the streetcar corridor improvements. The City received a $15 million grant for the project, have bid for construction of the first block, and are awaiting permission to proceed.  The team worked again successful bids for TIGER V and TIGER VII funding, most recently securing an $18 million grant in 2015.

Urban Advisors participated with Opticos Design in planning two SMART rail station areas for the City of Petaluma. We provided local and regional market information for housing, retail, and employment uses to begin the process and then worked with the public and the design team during a charrette to develop site programs and determine preliminary feasibility. The resulting scenarios were used to provide a basis for creating a form based code for the station areas and to assist in updating the current code for downtown Petaluma.

Urban Advisors assisted Opticos Design and GlazerWorks Architects in the creation of a form based code for four Cincinnati neighborhoods. Urban Advisors was tasked with ensuring the economic viability of recommendations in the code for each neighborhood and developing economic development strategies for neighborhood housing, employment and business with implications for physical development that would then be addressed in the code. The project has been considered a success and the code was approved this year. In addition, neighborhoods are moving ahead with plans for redevelopment with the assistance of the city economic development department based upon the work performed by the team. 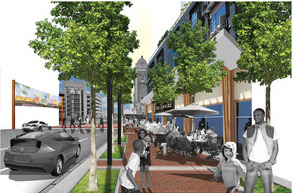 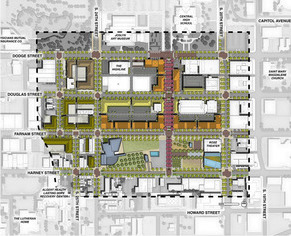 Developers and land owners in downtown Omaha took responsibility for coordinating development in their neighborhood and sponsored this study to engage the public and plan for the future of the Federal District. Working with H3 Studio, Urban Advisors assisted with stakeholder engagement and a public planning process that articulated a vision for the district. Our analysis provided insight to downtown business sizes and space requirements that together with employment projections demonstrated likely future demand for employment space by firm size. Demographic analysis and projections helped understand the demand for housing preferences in the area and described demand for a variety of products in walkable downtown neighborhoods. An important consideration in this neighborhood was developing “Whole Places” that offer housing for all incomes, ages and lifestyles with access to neighborhood services and employment. The resulting plan provides a strategy for essential public improvements that will allow new growth and private development in a safe, vibrant, inclusive and pedestrian friendly environment. Key concepts detailed new public spaces as well as a new main street and traffic configuration creating the hart of the community.

Urban Advisors was retained to assist Opticos Design in the development of an economically viable vision as a basis for a form based code for Beaufort County, SC. Through analysis of local employment and demographic trends and pro forma financial testing of alternatives in collaboration with the design team, the code was developed and included the following goals: freeing land from access restrictions that prevent development; repairing non-conforming conditions with coding that recognizes past patterns as a guide to the future while maintaining historic character; providing tools for preserving self-determining communities that enable change over time without undue expense; increasing land use efficiency in a way that enables landowners to realize greater profit on land held while also creating needed development and services in a way that benefits the community; and, increasing the flexibility of use to enable developers to respond to market conditions.